SAF 130th Annual Convention in Marco Island was a success.

If you have followed my writings at all by now you know that my show reporting is a bit unorthodox. I am not going to attempt to give you an event by event break down with all the action with proper names and titles. I will leave that to the professionals and if you are really interested then attend the convention next year in Amelia Island Fl. Instead I offer my thoughts and observations.

I decide to attend this event to feel the pulse of the industry from a more retail perspective. Based on what I heard and witnessed I would say there was much optimism to be found.  I had not attended an SAF event for several years and I am happy to report that this was a grand convention.

I don’t often use the word grand but since I had a grand time and learned a thing or two I think grand is appropriate. So what was so grand about it you might ask? Well first of all Marco Island is a great venue, not hard to get to and that helped lead to 93 first time attendees in a gathering of 400.

Of course there were the convention regulars that attend specific industry events religiously and many new faces as well. I like the fact that this is still a grand event which required a special call from my Mother who was attending as my date. As her escort she wanted to be sure that I would be dressed appropriately for the various events. I have to admit that I have grown quite “Florida casual” over my many years living in the sunshine. However, since I am told that I clean up nicely, I was happy to dress up a bit.

And that is the point. This event is about tradition and in fact the convention is a grand tradition itself after 130 years. While the pomp and circumstance is not over the top, like a senior prom, it does hold an air of sophistication without feeling stuffy.  No one can deny that this event provides a wonderful chance to network and at the root of it that is why we gather in the first place.  Clearly business was being conducted in the halls, on the beach, and anywhere else you happened to bump into a prospect. I certainly appreciate that fact that over the years the font size on the badges has grown as our eye sight has faded. It is awkward enough having to look at a young ladies cleavage to read her name much less having to reach for her nametag to read it.

The highlights for me were getting to hear Peter Moran’s industry predictions which can provide much fodder for online chattered and debate. Here are some highlights:

The obvious take away for me was the fact that he changed from calling them “wholesalers” to “dominate players”. See you in six years.

I was very disappointed to learn that the 2015 Proflora show will not be held in Medellin as scheduled. It seems like the chosen venue did not have ample air conditioning or perhaps none at all.  I was looking forward to visiting Medellin again but instead we are back in Bogota once again which a good thing, except for the traffic of course.

I did attend some of the educational meetings and they were well attended and for the most part interesting.  SAF’s Renato Sogueco who is their tech guy really knows his craft and provided some great feedback for those in his presentation. For many I imagine his talk was well worth the price of admission. Helping those that are lost in social media to those that are well on their way but need even more guidance as the game continues to change.

SAF is big on awards and the main event and dinner is flush with Awards. While some might find these patronizing I do not. I believe that it is important to recognize those that have done something special or contributed to the industry as a whole. This act keeps us together as a big part of the floral industry vs. just a bunch of people trying to make a buck.

Here are the winners.

It was great to see many friends that I have grown to know over many years and I think that there is a good chance of me attending next year. Hope to see you there.

And of course we have pictures to prove it. Enjoy! 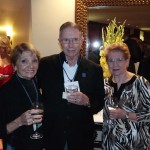