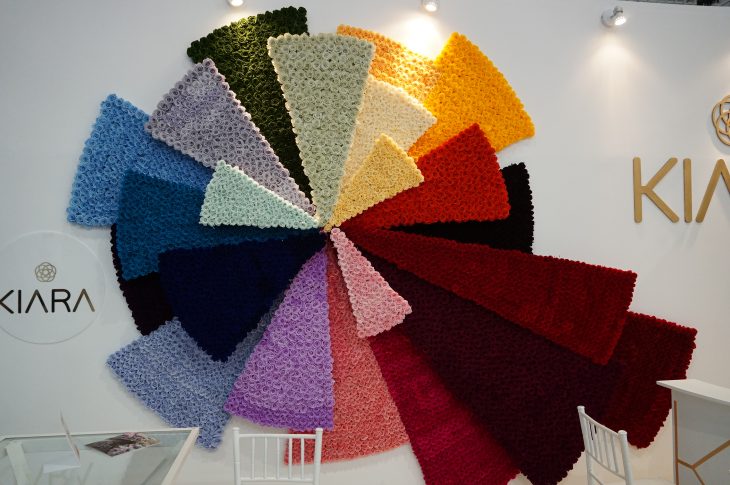 High in the mountains of the beautiful city of Quito, the excitement building up for these two shows could be felt in the very thin air.

A bit of history to set the stage. The Agriflor show organized by HPP, has been the showcase for the Ecuadorean flower industry for the past 16 years and up until this year was the only show. However, this year the floral association of Ecuador “Expoflores” decided to have their own show

“Flor Ecuador”. This new show has been in the works for several years but up until now Expoflores worked together with the organizer of Agriflor,

After it was determined that a new convention hall would indeed be ready for September 2018 they decided to go forward and host their own show.

I believe I am safe in saying that the Flor Ecuador show was a huge success! The new building was the perfect showcase for the Members of Expoflores to show off their impressive blooms in larger than life style. As a reporter that attends many floral shows I could not help but to notice the similarities between this show and the Proflora show held in Colombia. The Organizers of Flor Ecuador obviously took good notes from the successful Colombia show and made theirs even better, setting the bar higher for all.

The Agriflor show was also a big success! The exhibitors that I spoke with said that they had made excellent contacts and the buyers commented that they had more time to spend with the many new and old companies that were exhibiting at Agriflor.

It should come as no surprise that HPP was not happy about the turn of events after so many years of supporting the Ecuadorean floral industry. In a welcome gesture HPP moved its original date to the same as Flor Ecuador and provided a shuttle service in between the shows.

After a spirited conversation with the very determined Dick van Raamsdonk, General Manager of HPP, I have a better understanding of the direction of future Agriflor shows here in Quito.

Dick Assured me that there will indeed be a Agriflor show in 2020 with bigger and better things to come.

Basically the shows fell into two categories. Flor Ecuador is the Member show and Agriflor is the independent show. Therefore, the Flor Ecuador show was filled with the larger well established companies who really went all out to impress. The booths were elaborate, stuffed with flowers and very well done. The Agriflor show focused on many smaller growers that have never exhibited before  giving them a venue to show off their impressive products. As well, many of the breeders and logistics companies were present at both show.

Flor Ecuador assumed the role of hosting the opening ceremony where the President of Ecuador,  Lenin Moreno was present and offered much optimism about the floral industry. This is a good sign that the government recognizes the value of the floral industry. Ecuador currently has the burden of an 8% duty on roses into the US and it is hoped that the two governments can get together to eliminate this duty. Additionally, since the official currency of Ecuador is the US dollar the floral companies, unlike their Colombian counter parts, get no exchange benefits.

Flor Ecuador also assumed the role of hosting the grand party that is always a feature of these events. This time was no exception as the party was as grand as the show itself. I must admit that I am always amazed how these parties seem to can go on and on with everyone literally dancing the night away. When you notice that the bus schedule for party goers returning to the hotels began to depart at 1:30 and the last at 3:am, you get the idea.

After attending both shows I can tell you that I saw more preserved flowers being offered than ever before and they are beautiful when used creatively. The general buzz around the shows focused on logistics. As I have written about often, there are a lot of issues with airfreight. The airlines have been raising rates  while also reducing service in some areas. This on going issue has forced many large growers and importers to explore Ocean freight. There are containers full of all types of flowers (yes, even roses), departing from South American seaports each week bound for every destination imaginable. Shipments can take anywhere from as little as 4 days to as much as 30 days depending on the destination. While this might seem counter intuitive in an industry that is used to shipments being delivered in hours not days, but with careful planning it works well.

With that said Sea Freight will never never replace Air Cargo, for most of the industry, where the supply chain of a perishables is dependent on a very short window between an order and a delivery.

Some other news that I learned from the trip which I call: “Random notes.”

The Roy Houff Wholesale florist Company (Chicago) including all locations has been sold Joe Marnell (The former CFO) . Roy decided to retire and sold his entire interest to Joe which should provide for a smooth transition within the organization. Good Luck Joe.

The SAF convention recently held in Palm Springs was a big success with record attendance. One of the most interesting bits of information that trickled down to my eager ears was the talk of a Federal Marketing Order for floral. We have been down this road more than once with little success but there is a growing need and desire for more industry wide advertising to the public funded by the industry. Time will tell.

To all of you that told me that you enjoy my writing and reports there is no greater reward for me, thank you for allowing me to take a few minutes of your busy time.

Finally, I have produced my video review of both shows for your information and enjoyment.