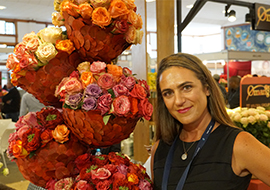 I was invited to attend this serious floral show in a land far away. A nation full of wonders and contradictions all laid out in front of you as you travel.

The show is well attended by many and the exhibitors go all out to impress.

I have covered this show for the last three years, and once again, assembled a group of North American buyers and logistic companies to see the floral happenings in this part of the world.

Kenya, Ethiopia and other African countries are supplying tons of flowers to Europe, their natural trading partner.

I have seen the flower quality improve each year and if the Ecuadoran’s think the Colombians are their competition beware of these African growers.

This year I served as a judge with two others, who fortunately, knew flower quality, better than I . It was quite a challenge to sort though and ultimately judge over 100 varieties of flowers and then determine the best stands. The exhibitors and growers take this very seriously and as a result we had to be diligent in our assessments.

One of the most interesting new filler product I saw was a Danziger product called Green Dragon. Shown by Black Tulip.

The general feeling I got from talking to many was that the growers have had a tough year with weather and low prices on the Dutch auction and even direct sales. This stress is most evident when talking to the breeders who depend on healthy growers to make royalty payments.

With that in mind the growers are eager to find new markets and North America is the prize. However, the logistics to reach this market are not favorable. Flowers must be flown via some point in Europe or UAE to reach Miami or major city in the US. As a result the buyers are only picking certain products that might be scarce in South America or the US

There has been some progress in getting some direct flights but so far only to NYC three times per week, with a wide-body passenger plane which does not allow for very many flowers and those are subject to getting bumped by baggage or other priority cargo.

Turning my attention to the Rich country that Kenya is, we find that the Chinese are ever present in this Country, as well as, other African nations, building huge projects. The problem is that they are using all Chinese labor and equipment and only utilizing Kenyan labor for menial jobs. Pretty much everything sold in Kenya is made in China.

Our guide said he wished the English would have stayed a bit longer since they brought laws, infrastructure and development that more or less stopped when they left and the Kenya’s gained its independence in 1963

Once again I struggle to best describe the conditions that I see as we move about the country. Westerners, like myself, see what most would consider very poor people struggling to make ends meet. While this is true on some level, the people I have met are proud, friendly and happy. Everyone is on the move doing something and as our guide said, “you do not see obese people here as they don’t stop moving”

Finally, I have prepared my video review of this fine show and the tour that we made including a Safari and grower tour. I believe my review will highlight the contrast that is Kenya today. Enjoy and if you are a qualified North American floral buyer and would like to join a tour next year in June, contact me.

Thank you for reading and please watch the video below.