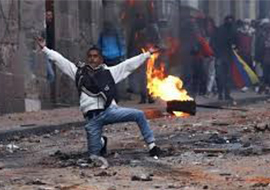 I have resisted writing too much about this situation as not to scare anyone however, every time I ask those in the know, the news gets worse.

I have reached out to growers in Quito to find out firsthand what the status of the civil unrest.

Let’s review the issue that started this whole mess. The Government raised the previously subsidized fuel tax and the Indigenous people took to the streets in protest blocking the major roads and making it impossible or certainly impractical to have workers attempting to get to work.

Here is the reality of what is happening.

The Indigenous natives, who have influence over the local cities/villages, are aware that flower farms have money and employees and need to be able to transport flowers.

I spoke with Alberto Cantillana, President of the Alkavat Group, a very large group of farms located in many areas around Quito.

Alberto said that: “The Indians have demanded he give them money, nonperishable food and some labor to help with the protest, in exchange for the ability to have peace at the farm and be able to transport goods.”

“I have told my employees to stay home and this is obviously having an affect on our production and ability to serve our loyal clients.We have had some vandalism and some theft of supplies so it is not worth, the safety of our workers, who are eager to work. We are basically being held captive by the natives.”

I also spoke with Michael Black, President of Jetfresh Flowers who recently opened a small rose farm in the Cotopaxi flower growing area.

“This is a catastrophe and we are very concerned for our employees and our clients.“

“On Monday some men came to the farm with large sticks and demanded everyone to leave the farms and join them in protest. The farms manager was told not to open the farm. They asked for food, which we gave them”

“ The local Floral Association Florexpo had arranged an escort for some growers in the area but no trucks showed up.”

“They have piled concrete and sand on the streets so it is impossible to get around and it you managed to get a few miles, then there is another road block. “

“Where is my floral local association, when we need them most? They need to alert the brides and designers of the world that they might not get 300 Tibet roses and need to substitute. We must work together as an industry“

This is really a dire situation for growers about to pinch for Mother’s and Women’s Days. No workers, mean no food for the flowers and this cascade of events, does not have a happy ending.

While some farms have manged to get some shipments to the airport the flower business in Quito is effectively shut down now for seven days and counting. If you are getting your flower, know that your growers are going to great lengths to get them to the airport.

He is what Xavier Beltran, General manager at Florecal, a large farm group in Quito had to say

“I have been in the industry for too many years and never had seen before a strike like this one. The amount of violence is crazy. Getting our people to work and back home, trying to get our flowers to the airport is a daily nightmare. Every day we find new obstacles. Road blocks, roads being destroyed, people being harassed, private property being damage. And all sort of blackmail. The worst thing is that even we generate as a sector over 300.000 jobs, pay our taxes on time we have not gotten any help from the authorities. Policeman and army are nowhere to been seen. Indians, I have no idea from where, think we are guilty of the economic measures the government was forced to take. They don’t understand we face the same problems they will. Freight cost will affect everything. We have to transport flowers, we have to transport our employees we have to pay for our supplies to be delivered to the farms. With a new gas price everything will be more expensive. And by putting pressure into us, they gain nothing. I hope someone will understand that we are force to pay for a situation of which we are also victims”

I dare not paint with too large of a brush and there might be some areas not as affect but I think I am safe to say the country is in crisis and the flower business is feeling it.

I don’t find it necessary to post more images here, as you can see them in the news.

I will keep you posted as I learn more, thank you for reading.