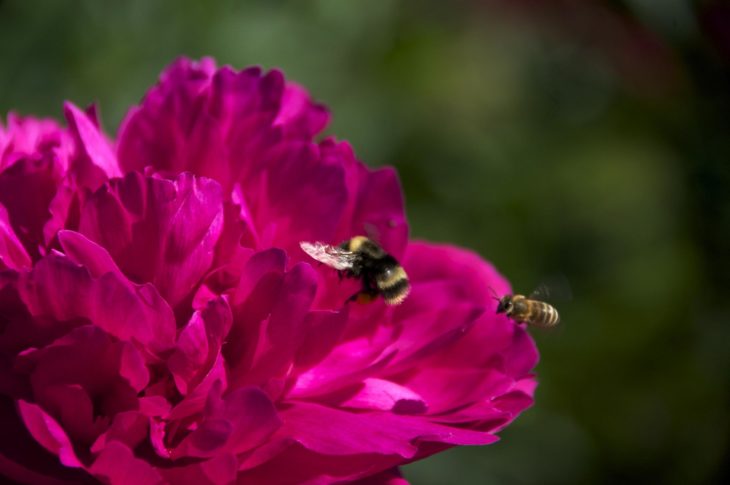 Within the farming world, Alaska is famous for crops as outsize as the state itself. The peonies grown in the state are no exception.

“We have a variety of white peonies  that are the size of dinner plates,” said LaDawn Druce of Sterling. “They’re just gorgeous.”

Druce and her husband Mike own Alaska Summer Peonies on Robinson Loop Road. Right around now, they and other peony farmers around the state are busy trimming, watering, and fighting off fungus in their farms in anticipation of the first blooms. Being cooler, Alaska’s peony season doesn’t typically start until late June, stretching out through August and even into September.

That’s later than the Lower 48, and that’s given the growers here an advantage. They are able to provide peonies to weddings, conferences, big events, and retailers when other cultivators can’t. However, this year, they and many other flower farmers are facing the dilemma of what to do with their flowers in a summer largely without weddings, cruise ships, or big conferences. The coronavirus pandemic has cancelled almost all of those worldwide.

David Russell, who co-owns Boreal Peonies just outside Fairbanks and serves as president of the Alaska Peony Growers Association, said peony farmers are facing the dilemma of whether to go to the expense of harvesting if there’s no assured sales of stems once they do.

“When you cut stems, your’e impacting your plants,” he said. “It doesn’t make any sense to cut your plants and then compost all of those stems when they’re not sold. Is it worth the labor, the cooling, all the post harvest things you need to do and the expense associated with that, if you don’t have a market already ahead of you? That is actually we’re probably four weeks, three weeks from harvest here, and we have to make that exact decision probably in about three weeks.”

Peony growers often don’t harvest their stems unless they know exactly where that flower is going. That saves them the waste and the harm to the plants. But this year, the usual orders may have placed a hold for 10,000 flowers and don’t want to give up the order, but can’t commit to buying it because they don’t know until the last moment whether their event is going to happen. Russell said that’s particularly true for the wholesale market that many peony farmers have relied on, and they’re not as familiar with how to navigate getting their flowers into smaller retail markets.

“There is a strong flower market, but it appears to be basically if you can sell directly to the public, the public is interested in buying flowers,” he said.

With a 13.3 percent unemployment rate nationally, it might be natural to assume people would be buying fewer nonessentials like flowers. In March, that was true, but in part because grocery stores shut down their floral sections. On Mother’s Day, grocers sold out of cut flowers. Rita Jo Shoultz, co-owner of Alaska Perfect Peony near Homer and council chair of Certified American Grown in Alaska, says people are buying more flowers than ever.

“People are wanting flowers more than ever, using them to celebrate life, celebrate the orders, much more than they ever would have in the past,” she said. “Once a person gets used to something like that, they want to continue it.”

The wholesale market may be short for now, but Shoultz says farmers have to zero in on retail clients and retool their ordering to allow for more individual sales. Some event planners are rescheduling for July, August and September, too, she said..

July is also going to be declared Cut Flowers Month by Congress.

“And that’s perfect for Alaska,” she said. “So people can come in on that. They have opportunities right now if they want to support that. And they can sponsor some of those things and get their names out there.”

In Sterling, Alaska Summer Peonies is doing what they have done for the past several years—selling stems directly out of their driveway. Their farm is a little different than some others, opting for selling stems directly to consumers rather than going to the wholesale market. To keep everyone safe from coronavirus, they’re prepackaging bundles of five or ten stems at a time, and ask that people call or text ahead to request colors and numbers. It’s not as profitable as wholesale in a normal year, Druce said, but locals really love it.

“Honestly, I really hope people are seeing this again as an opportunity—an opportunity for supporting local businesses,” she said. “I hope people will remember we’re out here. It’s great to support our local farmers, all of them.”

Right now, peony farmers aren’t eligible for coronavirus relief through the USDA’s $9.5 billion Coronavirus Food Relief Program for farmers, but Shoultz said the industry expects that to change. However, comments are still open on the Federal Register on the specifics of the program until June 22. Bryan Scoresby, the executive director of the Alaska Farm Service Agency in Palmer, said peony farmers looking for help can still put in an application to the agency for assistance and the staff there can see what they can do to help.